You guys, I’m not gonna lie to you: it was really hard to get myself to write this post. I’d like to blame it on my midterms, but that wouldn’t be entirely honest; I think I’ve just been feeling a general malaise lately, which is why this week’s ideal topic was obvious.

Don’t get me wrong. Writing this blog is second in my affections only to those of you who read it. For some reason, though, sometimes it’s just hard for people to get themselves to do stuff, even stuff they really like. As the semester begins to wind down, I find myself wanting to do nothing more than hang out on my couch with fictional characters from places like Pawnee, Indiana and Westeros.

Unfortunately, when you’re an adult like I am (I guess), not feeling like doing something isn’t always a good enough reason not to do it. Even though I’ve been a little uninspired lately, I still managed to do everything I needed to do for school, work and my own health (yes, Mom, I’ve been eating my vegetables), and now I’m even getting to the stuff which doesn’t have horrible consequences if I don’t do it—read: putting the finishing touches on this post.

Ennui notwithstanding, I find I feel way better when I’m producing work with actual results than when I’m a mental and physical couch potato, so I figured out some ways to galvanize myself even when I’m feeling like a lump. Here they are—do with them what you will.

What is not sucking? Not sucking is defined in the realm of self-motivation as simply being able to get yourself to do something, regardless of your level of organic enthusiasm for doing that thing.

1. Put on pants. Real ones, with a zipper and a button and no elastic waistband. They don’t need to be your favorite jeans or your most professional slacks, but they do need to be slightly less comfortable than pajama pants (or no pants at all). Your brain will want to justify the slight constriction around your lower body by doing something productive.

2. Remind yourself of the benefits of doing the thing. Exercise lowers your risk of heart disease. Grocery shopping lowers your risk of running out of food. Filling out job applications increases your chances of getting a job. All kinds of great stuff can happen if you do things… but sometimes positive visualization isn’t enough to get you off the couch. During those times, you should: 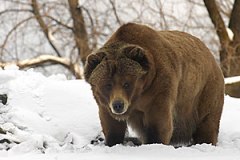 This bear senses your desire to procrastinate. Original image from wcs.org.

3. Remind yourself of the awful effects of not doing the thing. Waiting until the day the paper is due to write it could cause you to get a bad grade. Your bad grade could cause you to lose your professor’s respect. Losing your professor’s respect means losing your chance at a recommendation letter from him or her. No recommendation letters means no job. No job means living in a van by the river, where you could get attacked by a hungry bear. In essence, therefore, procrastinating another day on that paper could usher in your untimely demise at the hands (paws?) of a hungry Ursus arctos horribilis.

Of course, this slippery slope is unlikely to actually take place if you procrastinate. However, making the consequences of ignoring The Thing a little worse in your head than they would be in real life is a great way to get yourself to do it faster.

One gummy bear per paragraph? Sounds reasonable. I didn’t take this picture.

4. Offer yourself an incentive. I greatly complicated my life in the seventh grade by accidentally doing a science project that was good enough to go to the district fair. The project involved telling two groups of kindergarteners to alphabetize a set of words. I promised each member of one group a chocolate chip cookie if they alphabetized correctly; I promised each member of the other group a pat on the head. In a shocking and totally unexpected turn of events, the kids who were working for cookies alphabetized faster than the kids who were working for the satisfaction of a job well done. This logic doesn’t just apply if you’re five; if you promise yourself something in return for finishing a task, you’ll have more motivation to complete it. One episode of Parks andRecreation for every two hours of studying. One piece of chocolate for every workout. One cup of coffee immediately after you get out of bed. Five minutes of Facebook for every bullet point you finish on your blog post (ten if it’s a really awesome bullet point). If you give yourself something to look forward to that you only get after completing the task at hand, then you’ll be much more likely to do The Thing and do it quickly. (Quick word of caution: while the kids I promised cookies alphabetized faster than the ones who didn’t, they also made more mistakes while they were working. If you use the incentive method while you’re doing something important, make sure to go back and check your work at some point.)

5. Remember that it’s more important to get something done than to get it done perfectly. Sometimes we put off doing stuff because we’re afraid we’ll fail. Even worse, sometimes we’re just afraid that we’ll be mediocre. Everybody remembers the person who royally screwed something up, but the one whose endeavor was average is the one who is forgotten. Fear of doing something less than flawlessly doesn’t motivate us to do better; it just paralyzes us. Ninety-nine times out of a hundred, your first attempt at something (whether that’s a paper, a drawing, a new routine or talking to that cute person who sits six rows in front of you in class) doesn’t have to be your last attempt. If you go ahead and do it well in advance of whenever your deadline is, you’ll have more time to fix it and make your third attempt (or fourth, or fifth…) awesome. Your first draft doesn’t have to be great. It just needs to not suck—and once you let go of the need to do everything perfectly the first time, you’ll procrastinate a lot less.

Major inspiration for this post came from here and here. I don’t own either of these things, but I love them (which puts them on a list with things like Chanel purses and Kiki’s Delivery Service on Blu-Ray). If you feel motivated, come hang out with me on Facebook or follow me on Twitter @hownottosuckblg. Can’t wait to see you there!

2 thoughts on “At Motivating Yourself”