Hey! You know what sucks? Underage drinking. Don’t do that. If you’re under 21, nothing about this post should pertain to you. See you next time!

All right, now that we’ve got that disclaimer out of the way, us *~adults~* can chat in peace.

Most of the time, I still feel like a kid. I have no idea what I’m doing from one hour to the next, I can’t resist plush toys of video game characters, and one of my favorite TV shows is a cartoon. I’ve even recently gotten in on the coloring fad. But I never feel more gloriously 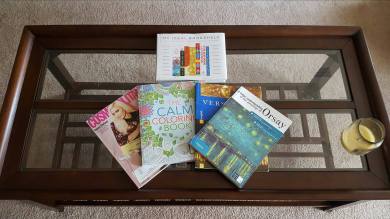 It’s classy if it’s sandwiched between a Cosmo and two books about French art.

like a grownup than when I’m sipping an ice-cold cocktail, flush with the knowledge that if the cops show up, I don’t have to throw my cup on the ground.

Not that’s an experience I’ve actually had. I was never interested in drinking as a kid. I’m not just covering my butt when I say that: my mom didn’t really drink, and also I was a nerd, so I didn’t get invited to parties where there were red Solo cups. (I was okay with that. Hogwarts was way more fun.) Today, I’m nowhere near “hardcore drinker” status, but I do like my Yellow Tail Pinot Grigio.

I’ve been to a couple of clubs and had an okay time, but my favorite places to hang out and sip some juice for grown-ups are intimate little holes in the wall where you can do stuff other than drink and laugh at drunk people. Indie retro arcade bars are where it’s at–liquor makes me better at Space Invaders.

Since I didn’t start drinking until I was older than all the characters in The Breakfast Club, I missed a lot of opportunities to do stupid stuff and then forget about it. I’ve been described as a “graceful drunk” by friends, which is about the nicest thing anyone has ever said to me. However, I’m aware that not everyone compulsively studied alcohol safety before taking their first drink. Here are some tips that have helped keep me from becoming any bar’s “that girl”.

What is not sucking? In the world of drinking with other people, not sucking is defined as leaving the bar upright, conscious, and no more debt-ridden or social media-ruined than you were when you arrived, as well as making sure to the best of your ability that everyone else leaves that way too.

1. Hydrate. 1 drink=1 glass of water. Most bartenders will give you water for free. (They know that if you hydrate properly, you probably won’t throw up in a dark corner.)

2. Watch your tab. If you’re trying to stick to a budget when you go out, use cash. Stop at an ATM on your way out, get however much money you want to spend, and then stick to that–do not open a tab when you run out of bills.

3. Watch your drink. People are horrible, and some of them will try to hurt you by tampering with your drink. If you’re chatting with a guy (while victims of drink spiking can be any gender, drink spikers are overwhelmingly men) and he offers to get you a drink, here’s a flowchart to help you out: 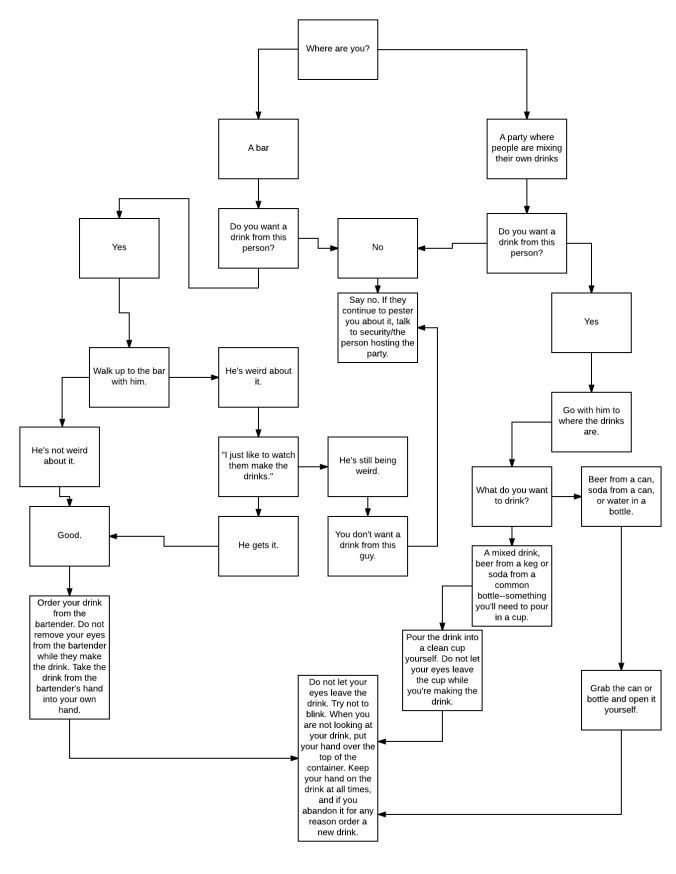 The above applies to everyone who has received or regularly receives offers of drinks from men, regardless of gender or actual sexual orientation. Don’t worry, people who like to buy people drinks! I made you a flowchart too:

4. Watch your friends. Obviously regular party behavior involves a little willing embarrassment; where would we be if no one had any shame about singing “Girls Just

We are the fortunate ones. Still from The Office.

Wanna Have Fun” on karaoke? But if one of your buddies is going over the top in a way that could affect them when they’re sober, take them in hand. No texting exes, no posting incriminating photos on social media, no crying on strangers, and no putting your feet up on the bar. Anyone exhibiting this kind of behavior should be gently coaxed into drinking some water and eating a little junk food.

5. Leave no one behind. Everyone should have an idea of how they’re getting home before they start drinking. Sucky people leave their friends to fend for themselves against predators, questionable transportation choices, and alcohol-driven impulses to stand on non-floor surfaces. If you see someone whose group has abandoned them, try to make friends. Get some water in them and encourage them to call an Uber or take the bus.

If you’re a girl talking to another girl, this should not be difficult, as drunk girls are the nicest people in the world. In my experience, when women drink, they become eloquent angels who have something kind to say about every other woman they see. I have been complimented more beautifully and effusively by drunk girls than I have by any other group of people, intoxicated or otherwise.

Regardless of gender presentation, always ask before touching people, introduce yourself, and explain to them why you want to help. Something like “I’m worried about you, and I want to make sure you get home safe” can help ease tension. If you approach people as respectfully as possible and genuinely want to help, with no creepy intentions, it should be okay.

However, it’s also important to listen. If they refuse your help, don’t push. Back off and try to find someone else to help them. If the drunk loner in question is belligerent or creepy, let security or the bartender know that you’re concerned about them and how they’re getting home–do not engage.