“Bend your KNEES, Shelby!” That was my drama teacher’s refrain at every dance rehearsal for Little Shop of Horrors in my junior year of high school. I was cast as Crystal, one of the three “Greek chorus” style girls who narrate the action with sass, song and shimmying. I had the first two covered, but unfortunately my dancing made me look like a chicken who’d just been shot up with epinephrine. Needless to say, that was not Mrs. Whittaker’s desired visual effect.

I’ve never been a good dancer, and I’ll probably never be a great one. I’m the opposite of athletic and my depth perception is awful, but most of the problem is in my head: I get nervous about moving my body in front of people, which makes me tense, which only makes my physical klutziness worse.

Unfortunately for people like me, dancing is everywhere; it was one of the first things human beings ever did for fun, once we got good enough at hunting and gathering to have a little time to party. Thousands of years later, young people are still gathering in large groups in dark places to move their bodies to music of varying degrees of quality. Bottom line: if you’re under 30 and you want to make friends, you have to be willing and able to dance without hurting anyone. 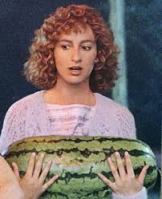 Nobody puts Baby in a corner… but they occasionally make her carry ovoid fruit. Original still from Dirty Dancing. Photo from pinkpeonies73.blogspot.com

Surprisingly (or maybe not), I’ve gotten way better at dancing over the past couple of years. Now, don’t get me wrong, I’m still not good, but at least I don’t look like seizing poultry. If the idea of dancing in public makes you physically ill, you don’t need to focus on getting really good at dancing; you just need to focus on getting to functional, because once you get over the initial awkwardness, dancing is really fun regardless of your skill level. Consider me your Johnny Castle—I won’t even make you carry a watermelon.

What is not sucking? Not sucking is defined in the world of rhythmic action as being able to move one’s body to the beat of music without causing bodily harm to oneself or anyone else… or looking like Jerry Lewis from The Nutty Professor.

2. Loosen up. If you’re not used to dancing, being at an event where lots of people are dancing can give you stage fright fast. However, unless you are actually on a stage in front of a captive live audience, the reality is that no one is watching you. Generally, in life, people are too concerned with how they look to other people to notice how you look. Like I learned from Mrs. Whittaker, worrying makes your body tense, which only serves to make dancing more difficult and less visually appealing. Relax your muscles and joints and try to focus on having a good time.

3. Do the Xerox. Having rhythm is one thing; having the right moves is quite another. If you’re dancing somewhere like a club or a party, look around and try to copy what other people are doing. No, not the ones who immediately draw your attention; those are the really good dancers, the ones who are actually out to dance and not just to socialize. Do not copy them. You will fall down. Copy the average dancers. Sway along with the crowd. If you think a move is out of your depth, give it a shot for a few minutes—remember, nobody’s looking at you—but know your body’s limits. (Twerking is way out of my butt’s possible range of motion, for which my family and friends are thankful.) Of course, if you’re in a class trying to learn a particular style of dance, do your best to copy the teacher and flag them down if you think you need a little extra help.

4. Find a partner. This person can be someone you’re attracted to, but they don’t have to be; the only requirement is that they seem friendly and willing to suffer through some novice twitching. Dancing with someone else gives you a chance to learn one-on-one, can satisfy a universal human need for touch, and helps you accomplish what you’re really out to do anyway: meet new people.

Maybe your niche is the Carlton. Originally filmed on The Fresh Prince of Bel-Air. Image from gifsoup.com

5. Experiment with styles. After failing miserably at musical theater dance, ballroom and Latin and just barely passing muster at club-standard “dancing”, I found my dance niche: swing. I have no idea what makes me like it so much. Maybe it’s the retro music; maybe it’s the innate courtesy of people who are drawn to swing dancing; maybe it’s just an excuse to wear a twirly skirt. I don’t know, but after a couple of lessons and dance socials I figured out that I’m weirdly good at it. The lesson here? Maybe you’re not bad at all dancing; maybe you’re just bad at most of it. You’ll never know until you try.

One thought on “At Dancing”